Happy late summer. I’ve been busy caring for and watering lots which is a feeble excuse for not updating the garden’s progress. So, here goes…

These are plants that I actually look forward to each and every summer. First, the crocosmia…

My son picked this plant for me one mother’s day. Perfectly named for him during his early teen years (Lucifer), wasn’t quite sure what to expect as it was early in the season and the plant had not yet bloomed. But when it did, I fell in love.

This plant is so exotic and tropical looking, but it is perennial in this zone (zone 7ish). Hummingbirds LOVE this plant and so I’ve moved it several times to allow for them to visit and suckle from a vantage point we can watch without interference.  The plants are quite stately and do not require staking. Even after the blooms fade, the seed pods are architecturally interesting and stay strong from weeks afterward. Before the end of August, I will cut them back at the soil level, just to give other bloomers more space.

Since its introduction to the quadrant, I’ve added more (more is more, in this case!) by purchasing the bulb packets in early spring from HD. Must be careful though, because these cheaper packets aren’t always labeled with the specific color. Some of these packets have less red, orange-ish colors. KP’s Canon has difficulty with these intense colors, unlike my as-yet-to-materialize-Nikon-7100. But I took one of those shots and posterized it, and this view enables you to see crocosmia’s beautiful structure: 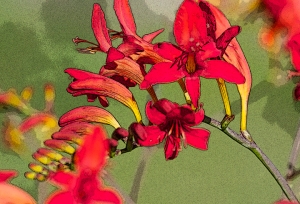 Absolutely, 100% in love with the Casa Blanca lilies…

…and I didn’t know until this post that this species is part of the oriental lilies, like “Stargazer”. I always assumed it was part of the Hemerocallis family – a style of lily I always thought I preferred.

These show girls bloom every year in the last couple weeks of July, serenading quadrant parties with their fragrant wafts of perfume. Some find the fragrance cloying, but then again they’re not in the quadrant!

As you may have noted, these blooms become top-heavy very quickly and have to be staked. Here’s another shot in combination with plain ole fancy-red dahlia’s and the caladium: 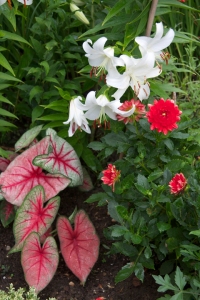 Mid-summer is also a time when holes start appearing in the garden, hence the red dahlia. Behind it, I’ve since planted a deep purple “dinner plate” dahlia, which I’ll show you when it starts taking off.

Among other combo’s I’m enjoying this summer are the black-eyed Susans, with the sedum as pictured here: 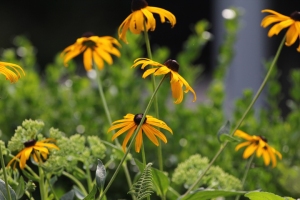 This was moved to the quadrant, in accordance with LTEG 1 as noted here. Yes, I do take my garden planning very seriously 🙂 The rudbeckia is doing really well in the quadrant and the haphazardly placement among the slowly maturing sedum is making me happy.  BTW, this also satisfies LTEG 2, too, in that these two plants are coming into maturity just as the Alaskan poppy is dying out. It did leave space next to the roses, and so I’ve filled that in with a *NEW* (yes, NEW plant!) species – an annual vinca. Here’s a close-up of this hot coral color:

Absolutely love the little white eye in the center. Too bad these are annuals; must remember to adopt early next summer. To completely fill up the space, I also added some cosmos “Sonata Carmine.” They’re looking a bit ragged from the mid-summer on-sale bin, but hopefully they’ll perk up and add some color towards the end of the season.

What I’ve learned? Loving the hot colors: can’t have enough reds, oranges and magentas. Also, time to credit two sources: 1-a great online plant finder for the Latin names, and 2-KP for taking the photos.

One achievement of a well-established garden is having a full, lush garden with constant interest throughout the season… or so that’s what my fantasy always said! I was looking for relief from feeling the need to have all the blank spaces filled with gorgeous foliage and color. Having always been on a budget, here are some of the ways I’ve been able to fill in spaces and provide interest without spending a bunch o’money.

1. Growing from seed requires a bit more patience and planning. For example, here are the hollyhocks.  I have ‘Nigra’; the other is a pretty pink (as pictured).

Hollyhocks are biennial, and will bloom the second year only, in my experience. They self-seed, so after growing the first year, you can discard or move plant colors to a location that works for you. They are tall and well-behaved. These grew to be nearly 6’.  I’ll let the seed heads dry out and then replant in  another spot for blooms in 2015!

I do the  same to propagate Asclepias, butterfly milkweed. This is an important plant for monarch butterflies, and can be found alongside highways and roads. It is a protected plant in NY state. I have two varieties:

This is Asclepias curassavica or “red butterfly” which is taller than the other I have – Asclepias tuberosa. I let the plant die back and in the fall when the seed pods brown and split open, I replant the escaping seeds that have a winged feather attached to help disburse it. Once established, they’re perennial bloomers.

2. Another means is by purchasing packets of bulbs and tubers from places like HD. The caladium(s) (caladiae?) I planted earlier in the season are coming up. Very happy with how these are faring and will get more next year. The white and green ones would be especially nice. Inexpensive with in-season gratification for not a lot of cost or care. (P.S. This is how I have also built up my crocosmia collection too. 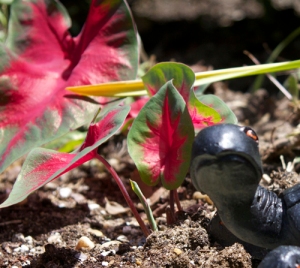 3. By trading with friends and neighbors, you can propagate many species. The gooseneck loosestrife were gifted from another’s garden… the friend of a neighbor, actually. When in bloom and planted en masse, they are cheery and seem to bob their heads in unison when a breeze blows. A caution about this plant: it propagates like crazy and can be hard to control as it sends tubers out and will sprout up in shrubs and other plants.

Other plants I’ve received this way (and also shared in turn) are the irises that bloom in the spring: Two varieties from an aging neighbor who has now passed, and two smaller varieties from a dear artist friend.

The end of spring is drawing near. It’s a wonderful time. A good garden dose has been distributed and yet there’s MORE. So much more to enjoy.

The end of spring is a deadline of sorts. By the start of the first day of summer, the general assumption is things had better be pretty set. No more moving of shrubs, planting of trees. There’s lots of time for heaving in of annuals, but if you’re a good gardener you’ll be wanting to have major tasks out of the way by summer soltice.

So I started thinking about my own progress with spring preparation goals. Most interesting when I reflected on this was that I did indeed have goals. Similarly surprising, I hadn’t yet articulated my goals for the spring. (blogworthy benefit)

Goal 1:   create a stronger visual barrier between the quad and the fence on the south side of the quadrant

Goal 2:   create areas with sequential and continual interest throughout the summer

Goal 3:   do less maintenance along the perimeter and front of house; move detail work to quad so that more of my time and attention is focused on plant maintenance in the quad.

Here’s what I did:

“Goal 1:   create a stronger visual barrier between the quad and the fence on the south side of the quadrant”

To do this, I moved the hypericum from the quad, north side, to new beds created adjacent to the fence. [note to self: add future post on creating new beds!] And I also started moving the Joe Pye weed from the south stretch to the most western south stretch. I added the hypericum from  the north side the quadrant to do two things – alleviate the constant trimming (hypericum can be a vigorous grower) and coax something with a smaller profile in that area for greater color exposure from the new room in the house.

(pic of new back beds not available)

“Goal 2:   create areas with sequential and continual interest throughout the summer”

To accomplish this, I purchased some bulbs from HD:

I planted Caladium underneath the Baptista. It will be shaded by then, I think, between the Crocosmia and Casablanca lilies (wait until you see these lilies)

I planted some anemone on either side of the walkway for section 4 and 3:

Can you see the red circle? Planted there and then in section 4 “The Bride” Anemone. Towards the extreme right in section 4 is Scarlet Flax. Here are snaps of the packaging: 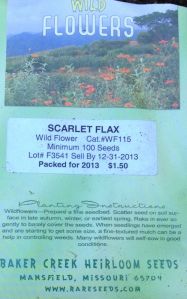 Of course, I’ve already forgotten where I planted “Mr. Fokker”… I think in section 3 somewhere. I may have also missed the timing on the scarlet flax. Will watch and see what shakes out with that.

In case you’re wondering, the big leafed plant adjacent to the anemones in section 3 is hollyhock, a biennial. Started it from seed last year so we should see some gorgeous blooms this year.

Can’t do a garden without some lovely salvia to brighten up the late summer and fall. I planted indigo spires on both sides of the front of the quadrant, just behind the boxwood:

Goal 3:   do less maintenance along the perimeter and front of house; move detail work to quad so that more of my time and attention is focused on plant maintenance in the quad.

Long-term extended goal 1 is to move the plants requiring maintenance out of the perimeter gardens and into the quadrant, because that’s where I want to spend my time. So, the Joe Pye weed is migrating up to the north side of the yard to aid with establishing a perimeter. More pics to follow.