Hello again! It’s been awhile since I’ve posted. We went to South Africa for a couple of weeks in June, and our mutual employer has instituted some changes that have rocked our world, but the garden remains a tranquil anchor. And what a riotous blast of color and texture one can experience at this time. Until I have some pictures and a new post ready, I thought I would share some thoughts on some visitors we have. 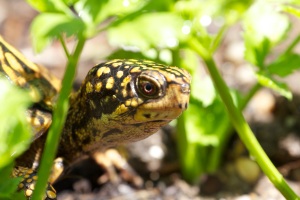 This box turtle was attracted by some watering I was doing. The markings on his shell are just gorgeous. He (why anthropomorphize with the male gender…hmmm) wandered in for a shower and a drink. KP chased the poor critter down to get this and many other shots. Here he is leaving the garden:

Another visitor of late is Shadow kitty from a neighbor’s house. Not sure of its gender; KP thinks its a “he” while I think it looks like a “she”. A very timid creature and always looking a little tousled, Shadow waits for us to place a little food outside and very gingerly accepts the gift. 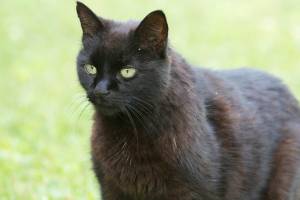 Update! (July 28, 2013) We’ve seen civilizations of dragonflies this year, perhaps due to a wet early summer that launched a bunch of mozzies and nasty green flies. Thanks to the dragonflies, these pests have been controlled. We love them for their pest control abilities and tend to idolize them architecturally. But it wasn’t until I read this post that my esteem was equalized by respect. In the garden, they appear to spend time resting (!) while holding onto a plant or lighting upon a surface. Once on a surface, their wings fold down as if in rest. 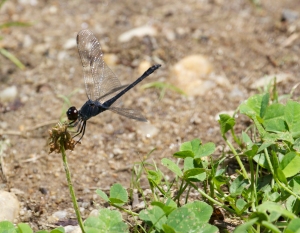 Oh, the illusive hummingbird! Always attracted to the crocosmia, they are ever so difficult to capture in photo. You can barely see it in this shot, but it is a gift to be relaxing and visited by these amazing creatures. 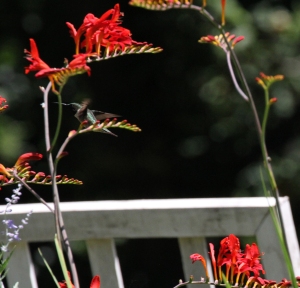 Added later: After a rainy morning, I watched in complete astonishment as this little bird preened and stretched in the afternoon sunshine. I have absolutely never seen anything like it. He lifted his wings, shuddered, stretched, posed – it was like he was doing yoga. Naturally, the camera was no where nearby. Startled when I did get up to fetch the camera, I didn’t have to wait too long for its return. But, the bird was entirely aware of having the camera aimed at him and this is the best I could get: 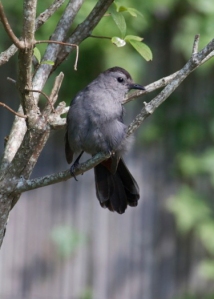